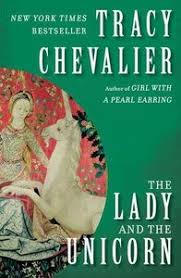 I love Tracy Chevalier.  She is a brilliant writer; her books are as timeless and gentle in as much as they are gifted pieces of work that reveal her in-depth knowledge of the era and the artists she often brings to life. ‘Reliable Creatures’ is fantastic, as is ‘Virgin Blue.’ I am holding on to ‘The Girl with the Pearl Earring’ like it is sacred, I have not read it yet. I know, know, – It’s like I’m waiting for an auspicious time – don’t ask me why – I want to read it and then watch Colin Firth in the film.  Maybe I’ll do it  at Christmas time… okay I’m getting carried away…

I began this book with the same massive enthusiasm I’ve had for the others. Sadly, I didn’t enjoy the book until I got to the middle, and even then the character of the artist Nicolas des Innocents failed to capture my interest. He is not impressive in the least, except that as the fictionalized artist of the beautiful Lady and the Unicorn he is remarkably talented. The story is woven around the mystery  surrounding the tapestries, now hanging at the Cluny museum in Paris. I was partly attracted to the story because of the mythical and often stunning Unicorn’s central role in the gorgeously woven tapestries. Des Innocents paints a seduction of the Unicorn, allowing himself to be that Unicorn in each piece of work, dividing it into the five senses: smell, touch, taste and so on, as he interprets the characters of the women he comes into contact with physically. The  purifying powers of the Unicorn’s horn plays into Nicolas’s interpretation of the whole game of seduction, which leads to the de-flowering ( to use the author’s words) of the woman he is attracted to, although it does not quite turn out the way he expects. Mainly known for painting portraits of noble ladies, his talent in this tale is uniquely expressed in tapestry art by a master weaver and his family from Brussels, although the central figures( expected to be from the noble family that commissioned des Innocents) eventually change, as does Nicolas, much to the surprise of certain characters in the book.

When we are first introduced to the Le Viste family, there seems to be some discontent between Jean Le Viste and his wife Genevieve. There is also  pride, wealth, a sense of what it means to belong to a noble family and beautiful daughters but no sons. It becomes quite apparent that Jean Le Viste is unhappy with his wife for not giving him a son, and he is clearly a man who gets what he wants. So when he commissions des Innocents upon his wife Genevieve’s guidance, to do the tapestries, he expects miracles which are entirely impossible given that his expectations are quite ridiculous. Genevieve plays her part beautifully. One cannot imagine her longing and heart really belong elsewhere, than being wife to Le Viste, although she is resigned to staying where she is.  Add to the mix, their daughter Claude who is beautiful, of nearly marriageable age and just discovering her potential as a woman. A  little meeting under a table with Nicolas des Innocents  sets the book rolling in ways I did not imagine.

I enjoyed meeting the family of weavers from Brussels the most; Georges Sr, Christine his wife and his children of whom Alienor was the only one I could not get out of my mind. They have none of the Parisian arrogance that des Innocents brings to their town. They are down to-earth and happy. Here, I began to love Chevalier’s style of writing once more. Her descriptions, Alienor’s stunning garden, and the challenges she seems to face every single day that she lives are integral to this book and this story. This was when I really began to “like” the book. The skill of this family who are somewhat able to survive on their earnings of tapestry making begin to show as the tapestries are born from their efforts. Even des Innocents who is incredibly vain and thinks no end of himself, is stunned at the level of brilliance and sheer talent when he sees his work come to life.  Again I tell you, Alienor will capture your heart. She is an amazing woman. The book is really a matter of opinion. If you have not read anything of Tracy Chevalier, you might actually like this book. Then as you move on to her other novels, you’ll like them even more. I will read anything she writes, but that’s just me.