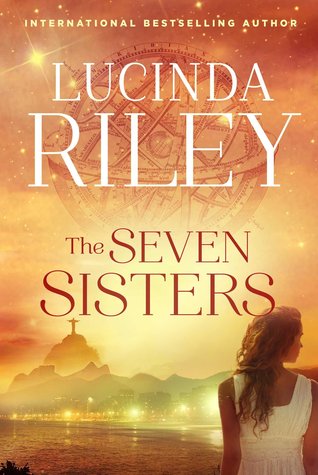 Lucinda Riley writes so lyrically, she could be composing a piece of music that you listen to, as you stand atop a hill, where the wind gently kisses your skin and transports you to an era that you can only summon and hear in your imagination. She can cast dual roles, juxtaposing past and present with breathtaking finesse in the most sumptuous of settings, you travel with her unknowingly, so completely at ease with the journey you take.

Her characters are so multi -layered they often ask to be defined and explored, until you fully understand their story. Each book is a gift; you take a journey, you search and you learn.

In this first book about the D’Apliese sisters, Riley takes us on a remarkable journey around the world. As I traveled with the characters – Lake Geneva, Rio and Paris – I chose to stay for a while, in Brazil, with ‘Christ the Redeemer.’ I watched him atop Mount Corcavado, in Rio, with his arms outstretched, encompassing all who raise their eyes to him, I simply could not leave. The story in Rio is raw and honest, it tugs gently at you, allowing both hope and hopelessness to invade your thoughts and actions. I wanted to remain tied to the past.

Paris was beguiling. Filled with passion, creation and discovery, a sweet and innocent love made me weep. Lake Geneva left me speechless. With its spectacular setting, a gorgeous childhood home ‘Atlantis’ and an odd serenity that permeates your being, it is nothing short of stunning. I use the word odd because Atlantis seemed to be shrouded in mystery very early on in the story, yet, it appears blissful and ethereal at the same time. More importantly, that setting in particular, lays the foundation for the story.

This book appealed to me on so many levels. I was utterly and completely drawn to its title and how seamlessly Lucinda Riley tied in Greek mythology and history to this wonderfully complex, layered story. The Seven sisters or the Pleiades( a cluster of stars) in mythology were companions to Artemis the Goddess of Hunting, daughters of Atlas the Titan, and the sea-nymph Pleione. There are several stories surrounding them, the most famous being Atlas – while bearing the burden of the heavens on his shoulders – who could no longer protect his children from danger, especially from Orion the hunter, who began pursuing and wooing the maidens. Zeus took pity on the sisters and immortalized them into a cluster of brilliant stars. It is said Orion still lies in wait, pursuing them across the deep, dark midnight sky. Maia the eldest is said to be the mother of the Greek god Hermes. I should mention that the Pleiades typically appear in Winter and sort of marks the end of sailing season in the Mediterranean. Sailing is particularly significant to this story.

Maia D’Apliese has just lost her beloved father. Pa Salt a mysterious, wealthy figure, who seemingly had an abundance of love, an open heart and a passion for sailing, was an enigmatic man. While on vacation, Maia hears of his death from the beloved Marina who helped raise her, she learns Pa is already buried according to his wishes. Much to her sorrow, nothing more is to be done until her return to Atlantis. Maia can only sit with her grief and the many questions running amok in her mind. Her task is to get in touch with her sisters, of whom there are five. In revealing there are six girls, not seven, as the title of the book implies, it is but the first mystery of this series. I’m not giving away too much by revealing it.

Pa Salt named his girls after the Pleiades.The girls are adopted. Upon his death, he leaves each of the girls a clue about their heritage. As he was in life, Pa Salt’s clues are mysterious, connecting each sister to a map of the world, indicating their search begins with that map. This first book is about Maia.

Maia’s clue leads her to Brazil, to Christ the Redeemer, and an old mansion with ties to wealth and prominence. When Riley writes of the past, she absorbs every nuance, every sight, every smell, you are drawn to, and immersed in the story immediately. As Maia learns about her great-grandmother Izabela Bonifacio, her intense story begins. While the reader begins to experience Izabela’s life in the most realistic sense, parallels between past and present are quickly and cleverly intertwined. Not only does Maia look extraordinarily like her beautiful ancestor, their loves and losses are much the same, except they occurred in different eras. Maia travels into her past with a tile, a name, and the help of a handsome author/historian. Here, Lucinda Riley blends history into her novel by weaving in  the creation of Christ the Redeemer. It is a subtle shift, yet filled with extraordinary detail when she draws Brazilian engineer Heitor da Silva Costa, Polish/French Sculptor Paul Landowski and a brilliant young apprentice Laurent Brouilly, into their own story, combining and creating a visual of their very real talents, while they worked together on one of the world’s most iconic statues. As piece by piece of reinforced concrete and layers of smooth soap stone brought the statue to life, his beautifully cast hands took my breath away, they are especially symbolic in the story. Well written and researched, (I noticed the author’s research also included Robert Graves, ‘Greek Myths” – a large, personal hooray for that book in particular) Riley delivers a classically symbolic, thoughtful and remarkable historical novel.

Thank you to NetGalley and Atria Books for the Advanced review copy.